Repetitive and flexible - Sounds too good to be true?

To many people "Lean" is primarily about reducing waste in the factory. To appreciate it is more than this one needs to understand the Toyota World Class model, the origin of Lean Thinking principles, as originally drawn by Fujio Cho of Toyota in 1973. 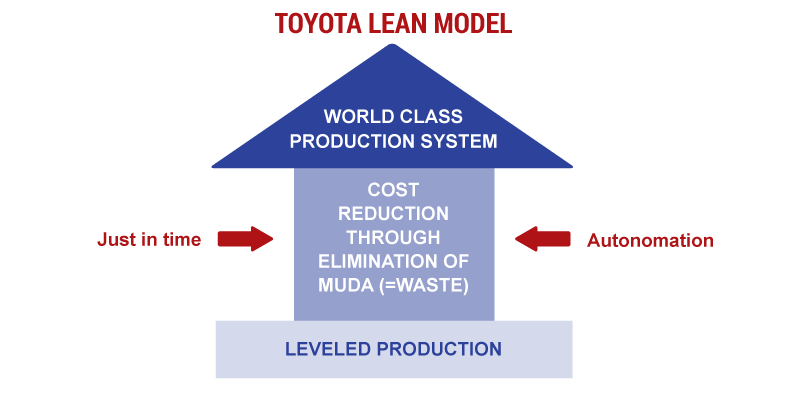 The foundation of the system is leveled production, or to use the Japanese term heijunka. Waste elimination is certainly part of the model. However to implement the Toyota Production system one must first build the foundation.

The definition of leveled production can be found in many articles and books on Lean. The objective of leveled production is often described as being "one piece flow matched to market pull". In other words, perfect material flow with zero lead-time and inventory. For many companies this is a theoretical nicety yet a practical impossibility with their products, plant and equipment. The idea of leveled production is therefore dismissed and the prime thrust of LEAN in the organisation becomes waste reduction in the factory.

However "one piece flow" represents the final step in a progressive evolutionary five step process. It certainly isn't where Toyota started. The first three steps of heijunka steps focussed on creating stability and only the last two steps aimed to achieve flexibility. Most Lean books only focus on the latter steps missing out the essential initial steps. Stability is a necessary and crucial condition for sustainable continuous improvement, standards and common procedures.


You maybe thinking 'how come you know about the steps involved in progressively implementing heijunka when others don't?'


A reasonable thought and here's the answer:

Twenty five years ago, having graduated as a microbiologist I was production Manager for a factory producing enzymes from deep-culture fermentation of bacteria. A highly technical and variable process. We developed a way of working we called Repetitive flexible Supply, because it simultaneously achieved the conflicting objectives of meeting customer orders that were short lead-time and unpredictable for products that had very long lead-times while keeping stocks low and efficiencies high.

In the late 1980's on a factory study tour to Japan, I met Yoshiki Iwata - a sensei from Toyota Gosei. When explaining Repetitive Flexible Supply to him he laughed and said it was the same as first steps of heijunka. He said it was the first time he had heard a Westerner describe the true foundation of Lean as most were only looking at where Toyota were now, not where they had started with implementing leveled production many years before. He gave an explanation of the steps involved and how these formed the crucial foundation of LEAN. He showed how they provided a direction for the application of Lean tools and how following these steps actually resulted in eliminating muda i.e. waste reduction was a consequence of implementing the progressive steps of heijunka. We came to recognise that heijunka, the initial steps of leveling and Repetitive flexible Supply are just different terms to describe the same principle.

This explanation helped us to develop a step by step methodology for implementing leveled production in industries where it currently may seem impossible, particularly the process industries such as chemicals, food, drink, pharmaceuticals, toiletries, paints, etc.

However, a word of warning. These first steps of leveled production are counter-intuitive and fly in the face of conventional wisdom. Or to put it another way they seem totally RIDICULOUS AND STUPID.


To find out more please go to our books and articles

What is remarkable is that so few companies or people have arrived at this understanding of heijunka. I have stumbled across no-one, until you, who has discovered this on their own. I think, as you suggest, more people should be able to understand these concepts.